The train system is cheap and effective in Morocco. I have used it to travel between Rabat, Marrakech, Fes and others regions of the country.
Finding out the schedule is simple through the ONCF (the train company) website.  ﻿

I have given you an English translation to help you, as the site is in French. 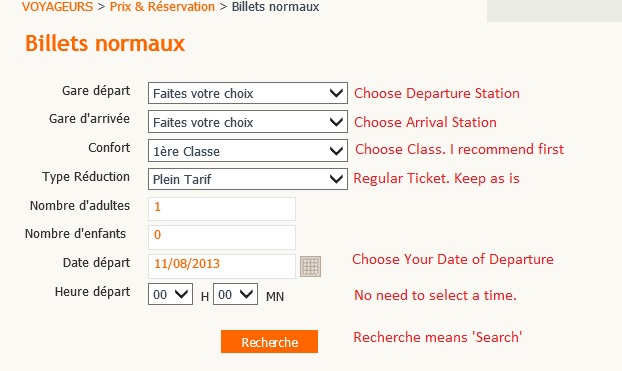 Once you have put in your search terms, you'll get the train schedule between the two towns.  For example, I put in Marrakech to Tangier, in this case called Tanger.

Here is what you want to pay attention to.  One column says 'Correspondance'.  That means at the station listed, you have to get off at that station, and transfer to another train.  I will go into this in detail later.  The last column is the cost.  Its a 24hr clock.  To figure out what time it is, if the time exceeds 12pm, just subtract 12 to get the p.m. time.  In the case of the second last line for example, departure is 13h00, which is 1pm and arrival would be 10:25pm.

From what I have seen, the trains have two main classes: First class and Second class.   The price difference can vary from as little as 40dh to 100dh and over.  In both classes, there is air conditioning and it is unreliable in both.  In both you can lift the arm rests up to lie down if you're lucky enough to have a row of seats to yourself.  What first class and second class can look like in different trains vary in terms of seat appearance and positioning.

First Class: These tickets are pre-assigned. You are guaranteed a seat.  As you will see in the photos below, the seats are cushioned and spacious.  There is much more leg room than in second class.  There is enough overhead space for you to store medium sized luggage.  More ONCF workers are going back and forth on first class. So if you tell them to alert you to your stop, they will. 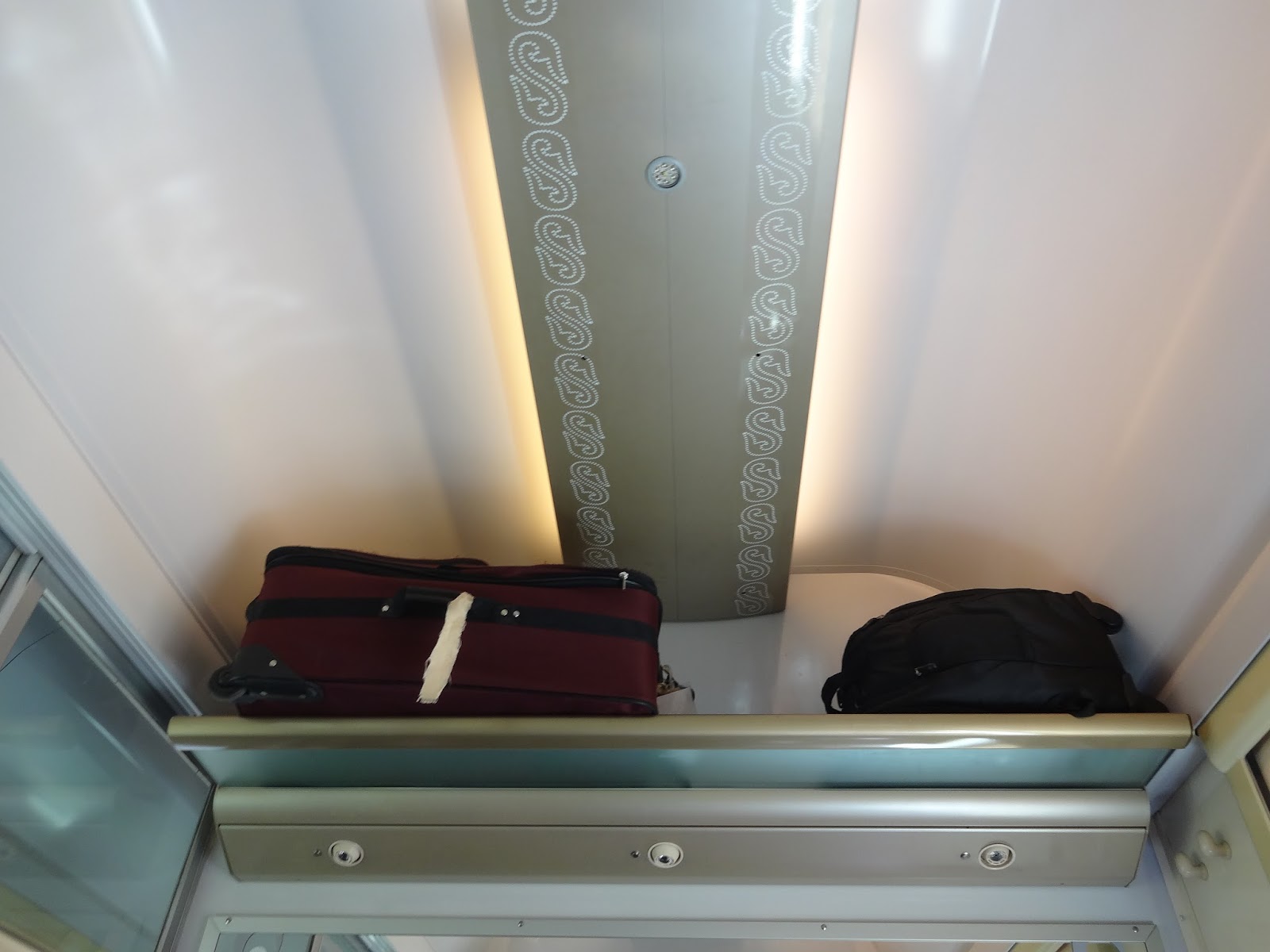 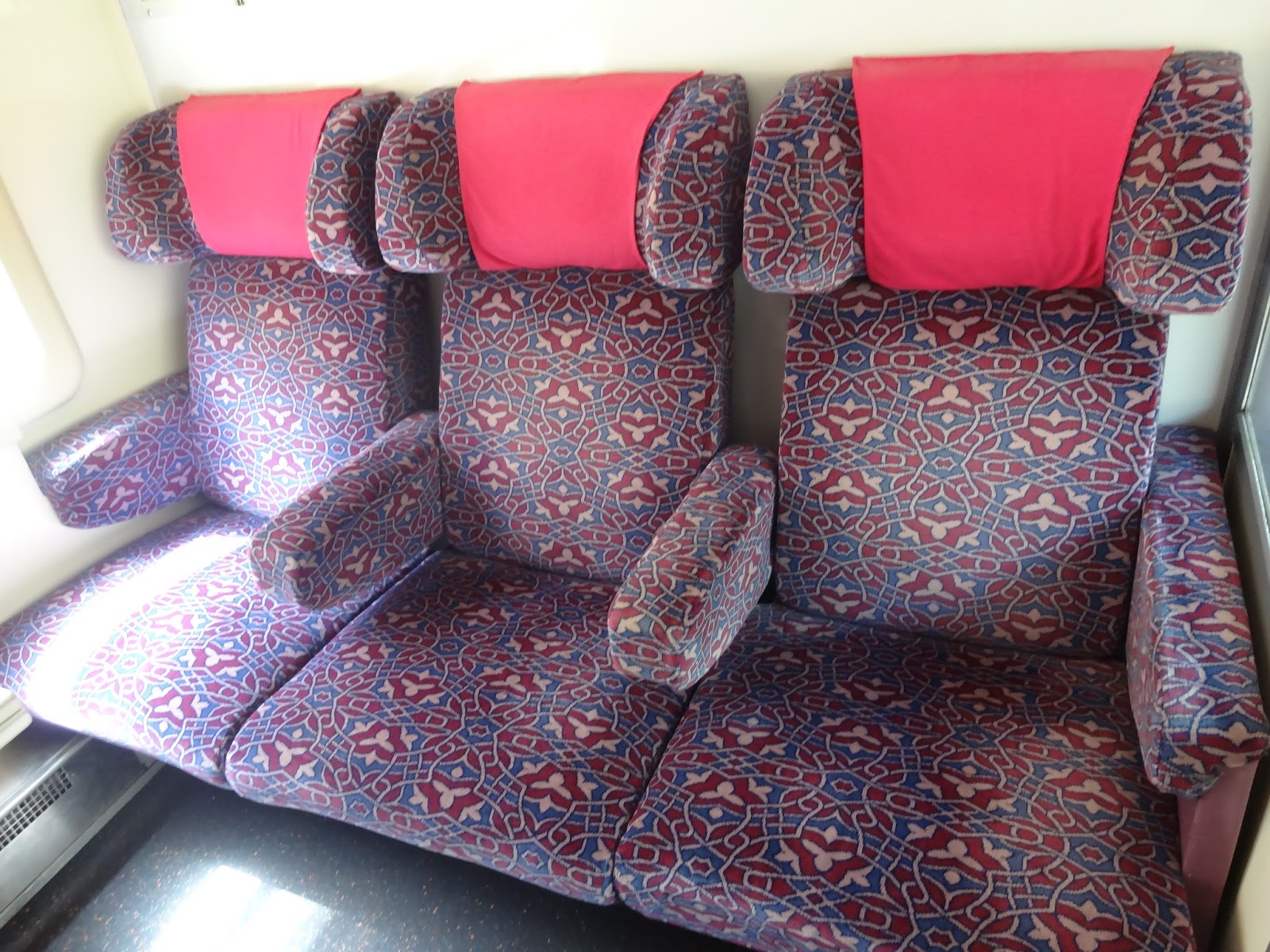 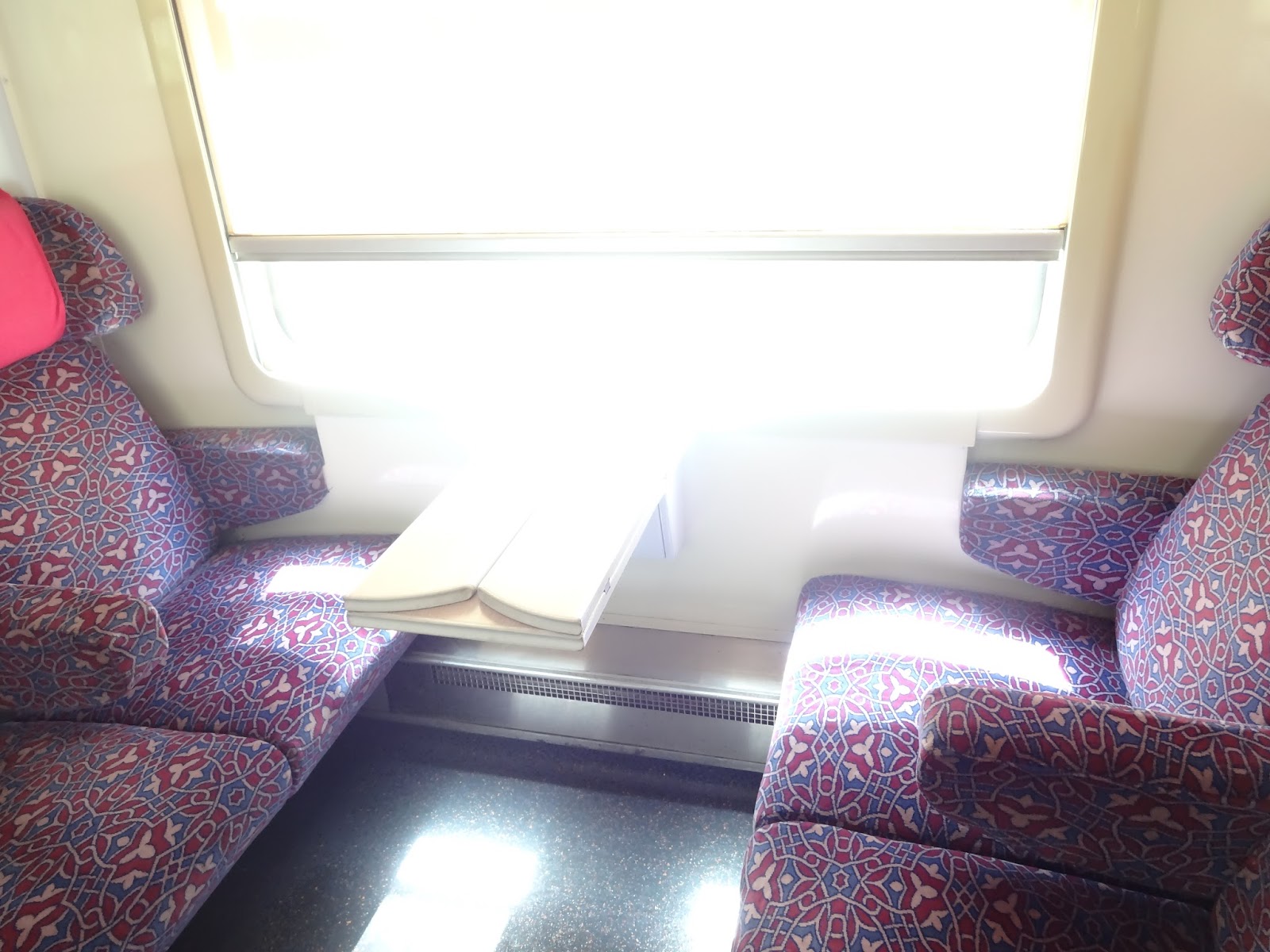 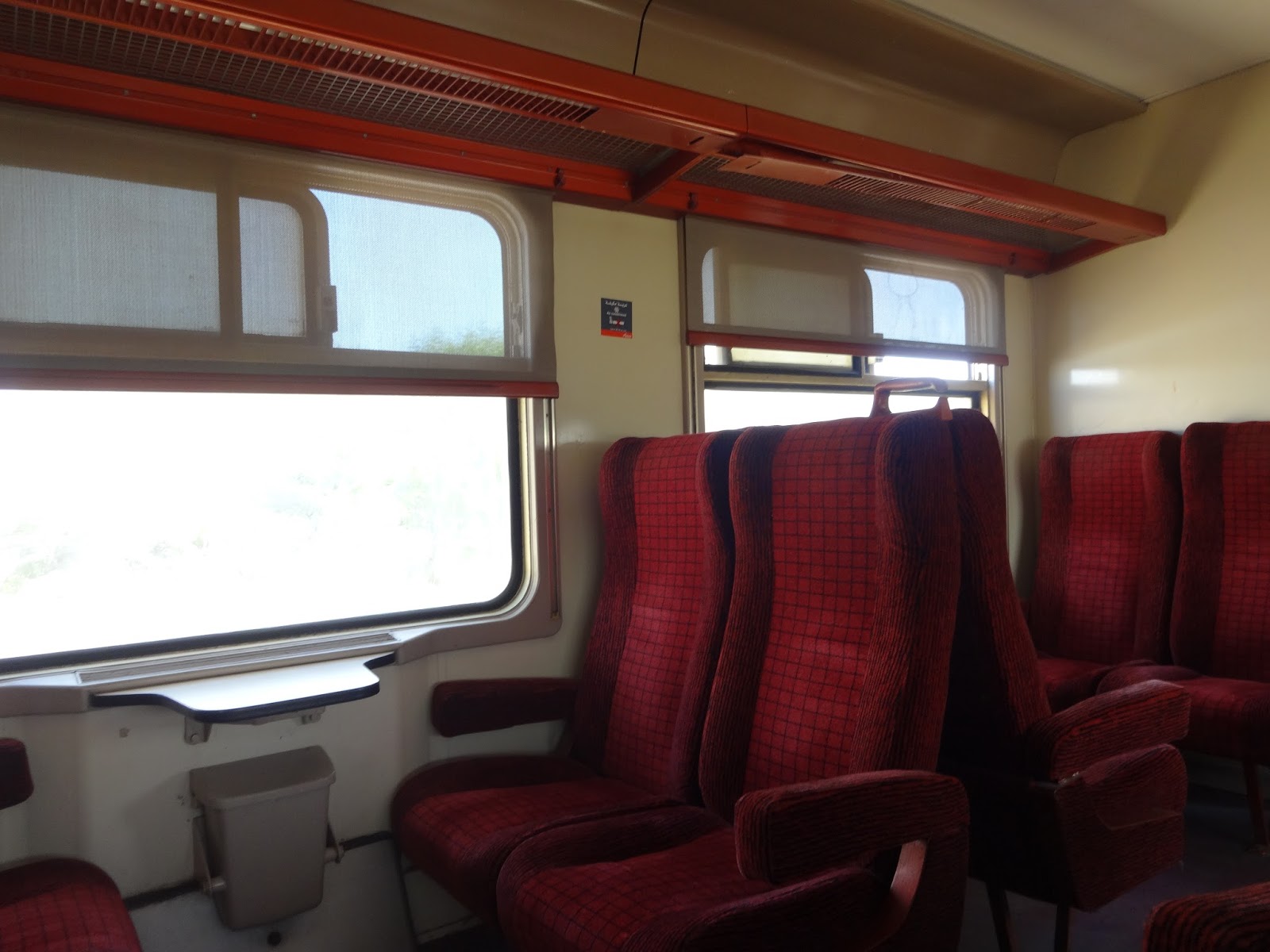 As you can see from the few above photos, first class can look different in different trains. Regardless, they are always more spacious.

Second Class: Second class costs less, but also has air conditioning.  Seating is based on first come, first serve.  They seem to oversell the tickets because people will be standing in the aisles.  The luggage space is also very minimal, which sometimes means we travelers are left with no choice but to annoy the locals by blocking alley way space with our luggage, and it gets embarrassing.  The leg space is also tight.  At times you are knee to knee with others.  If you want to guarantee yourself space and especially a  place for your luggage, no stress, take first class. 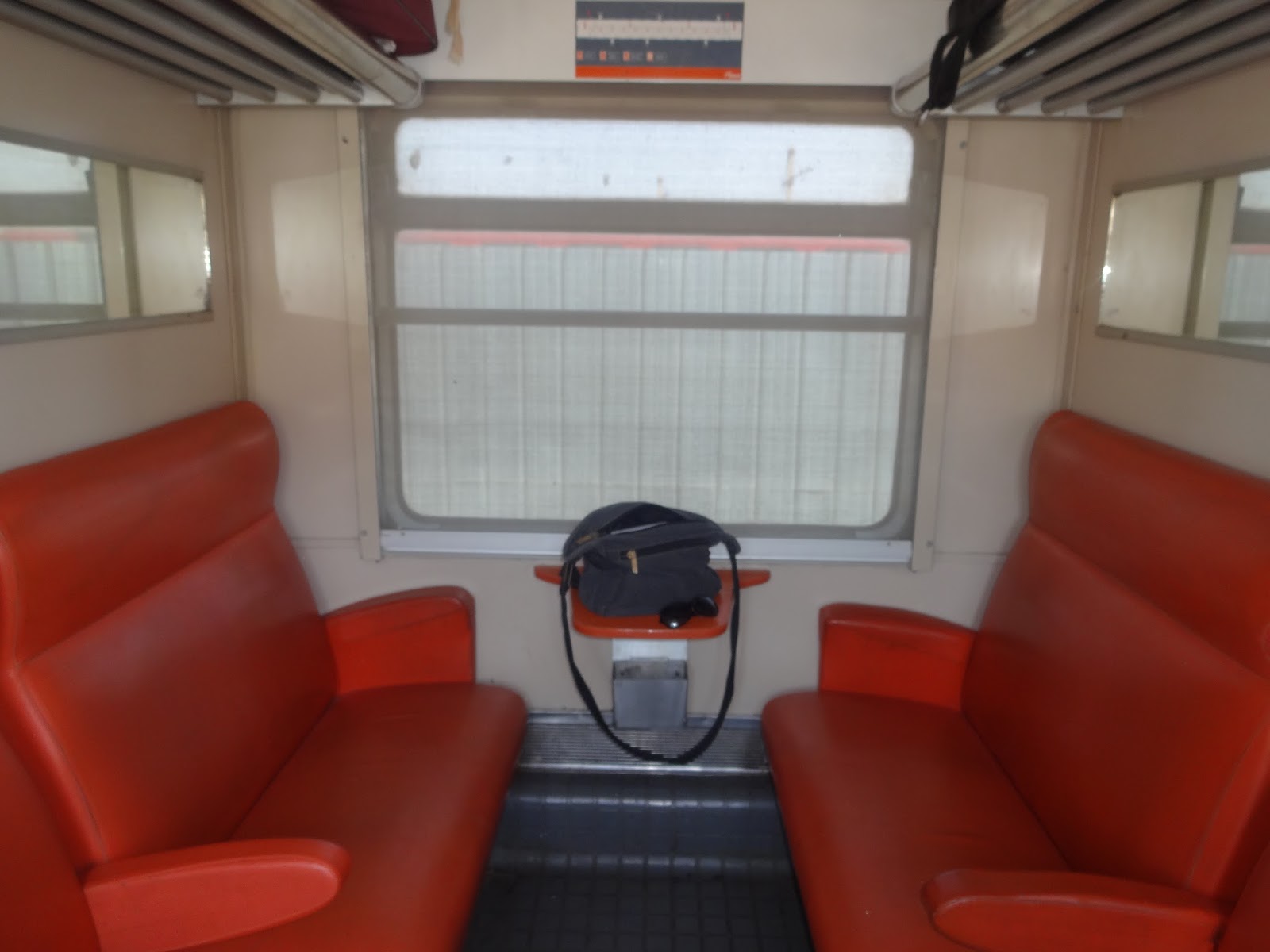 Couchette: This is the most expensive ticket, however is also provides travelers with the most comfortable ride.  Couchette cabins are typically air conditioned and offer convenient sleeper accommodation.  Couchette is particularly recommended if travelling long distances or on over night journey. I personally have never seen a couchette.

The train stations are very modern and beautiful, even in the most rural areas.  At the station you can easily buy your ticket 30 mins or 15 mins before the train arrives.  The tickets are sold at counters, or automated machines.  Often there are ONCF helpers standing around who will process the purchase for you: 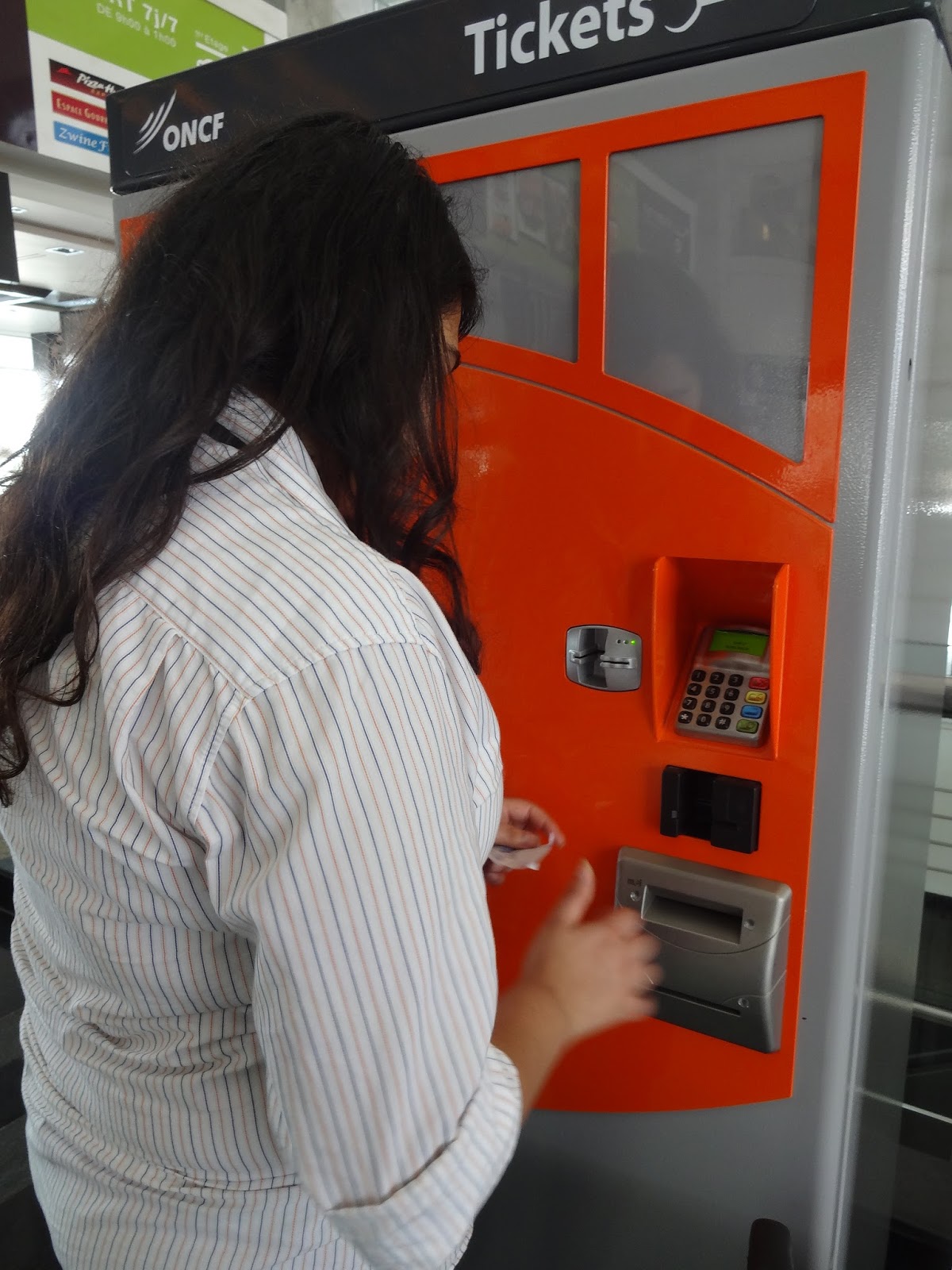 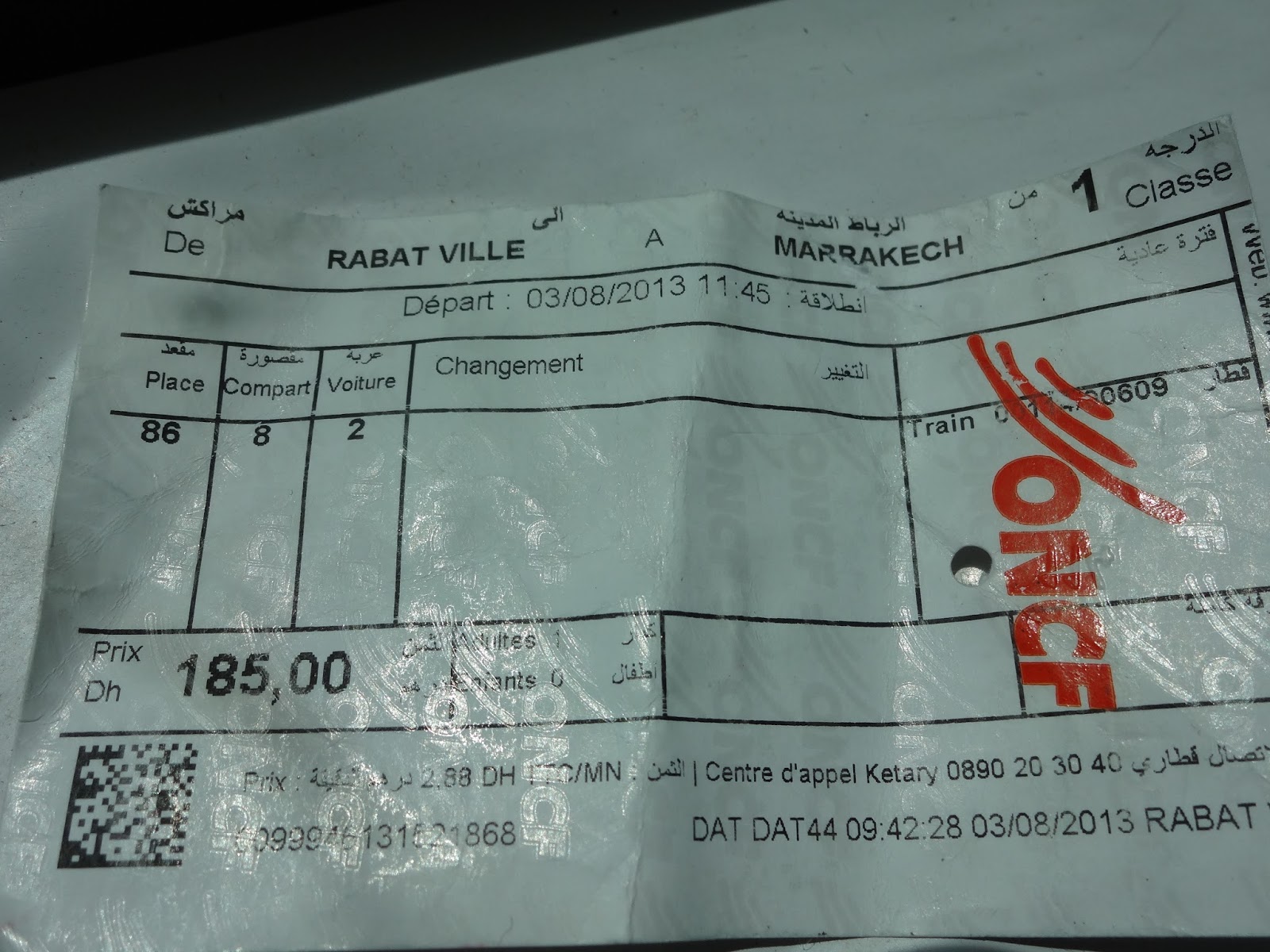 
Note the Train Number under the orange print.

When at the station, you have to look at the LCD boards for your train. It will list the Destination, Time of Departure and also the train number.  The train number is under the orange print in the first photo. Voie on the blackboard means 'platform'. 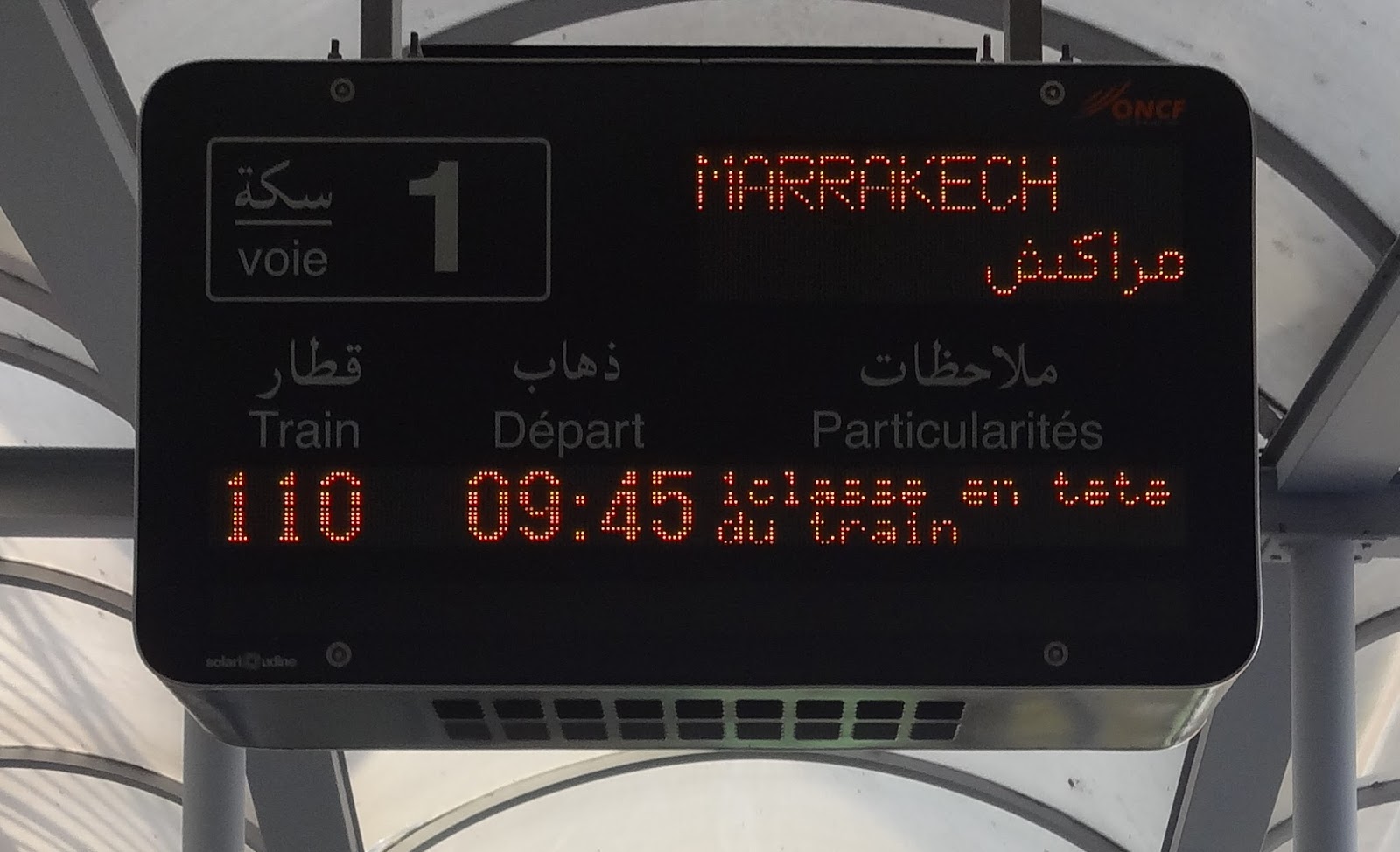 The class will be confirmed on the top right of your ticket.  The 1 and 2 listed on this train indicate 1, for first class, and 2, for second class.  The first class cabins are both at the very end and beginning of the train, so you know where to wait at the platform. 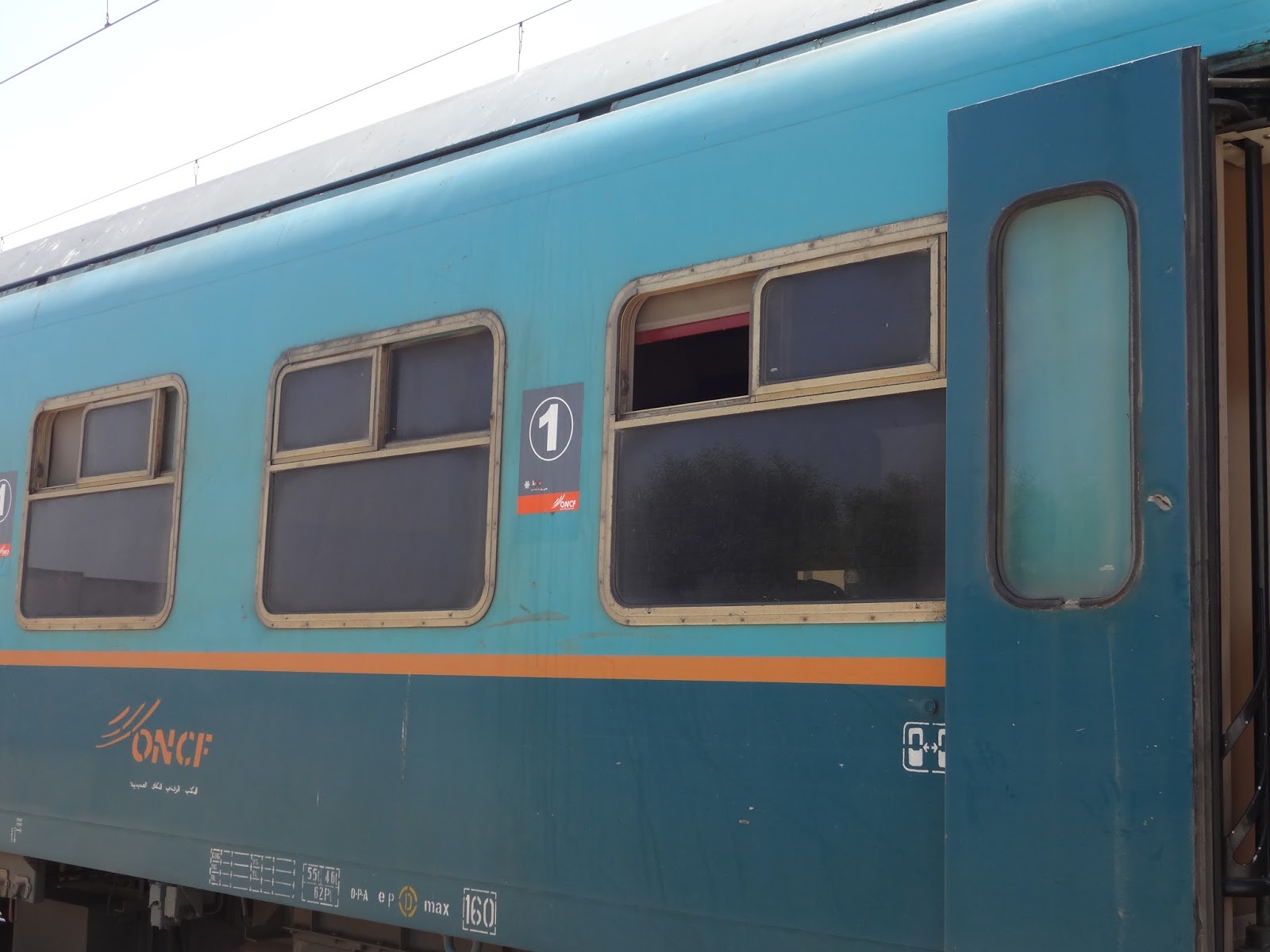 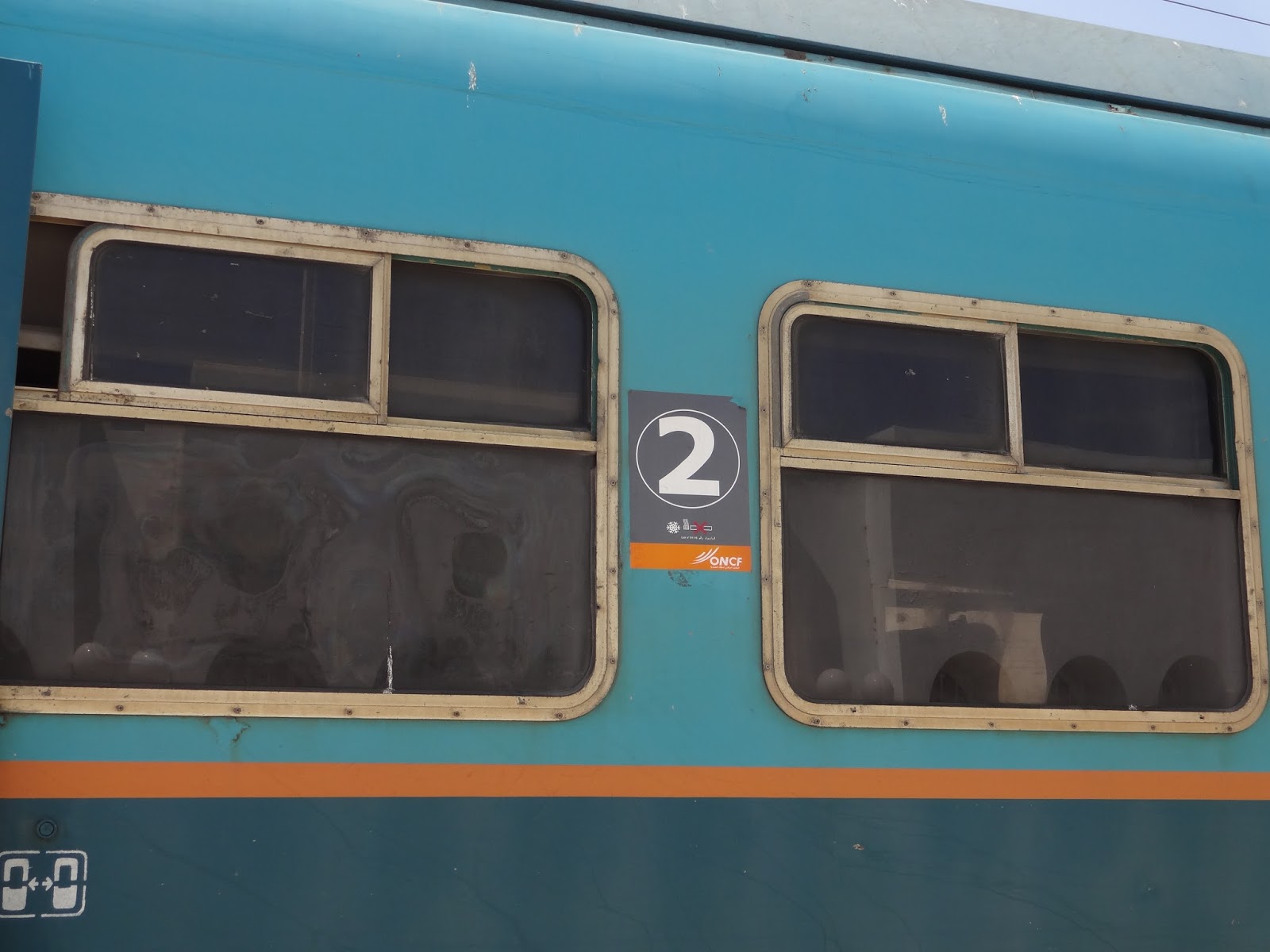 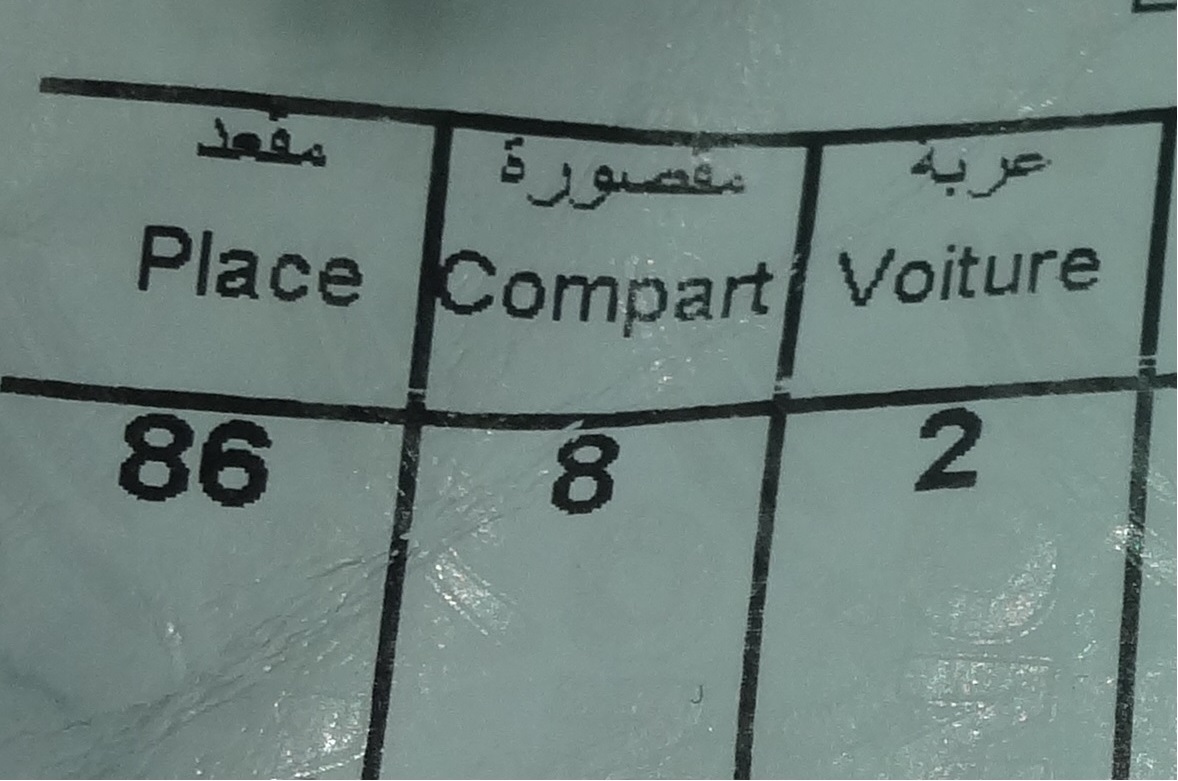 Place: Your seat number
Compart: Your cabin number within the train
Voiture: Your train cart
Note: There's no assigned seating in second class, and in first class people often sit wherever looks semi-empty.
Compartment is listed on the glass doors of each cabin: 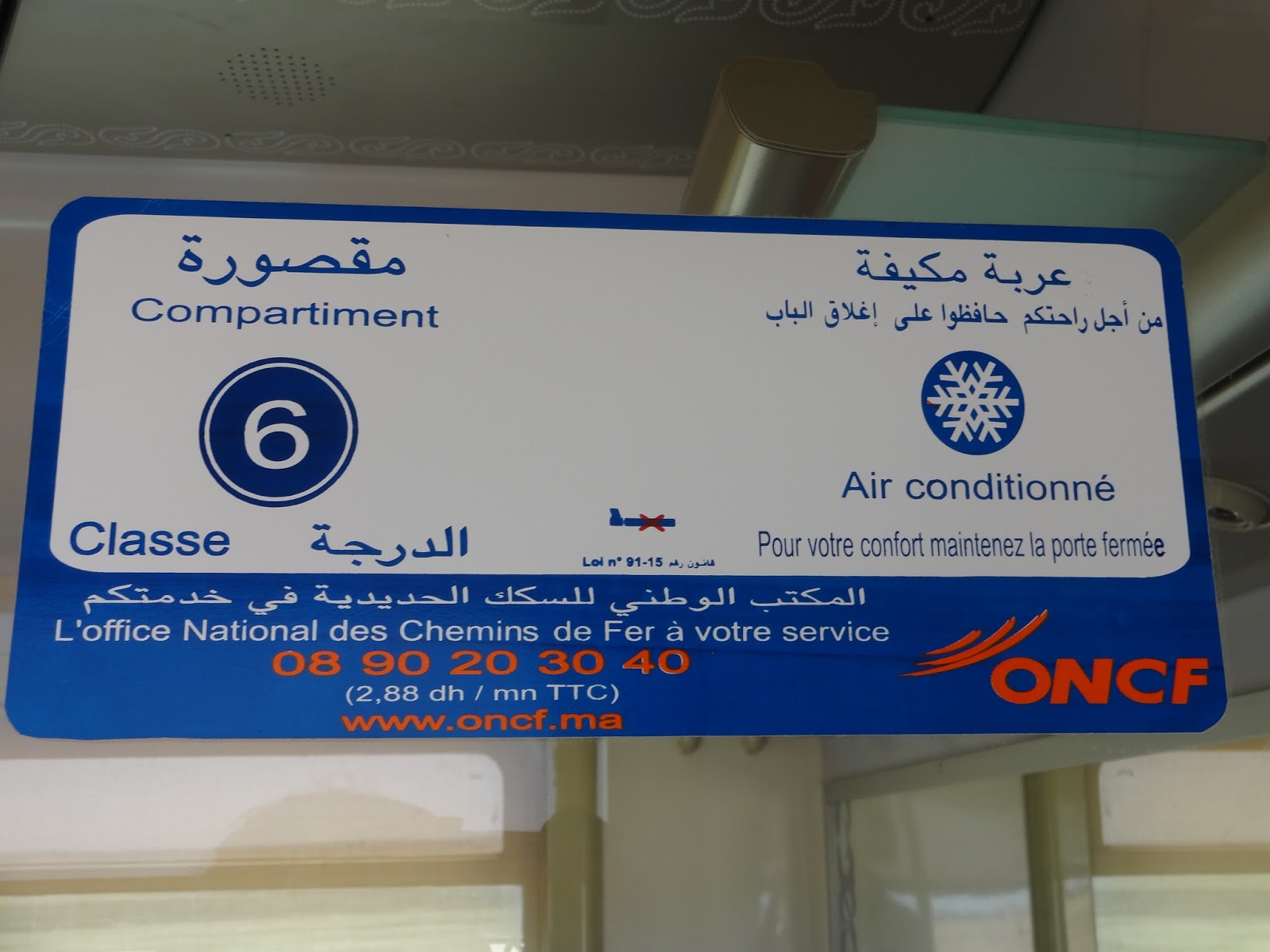 See the seat number above the chair. But no one really pays attention to compartment and seat if there are emptier cabins: 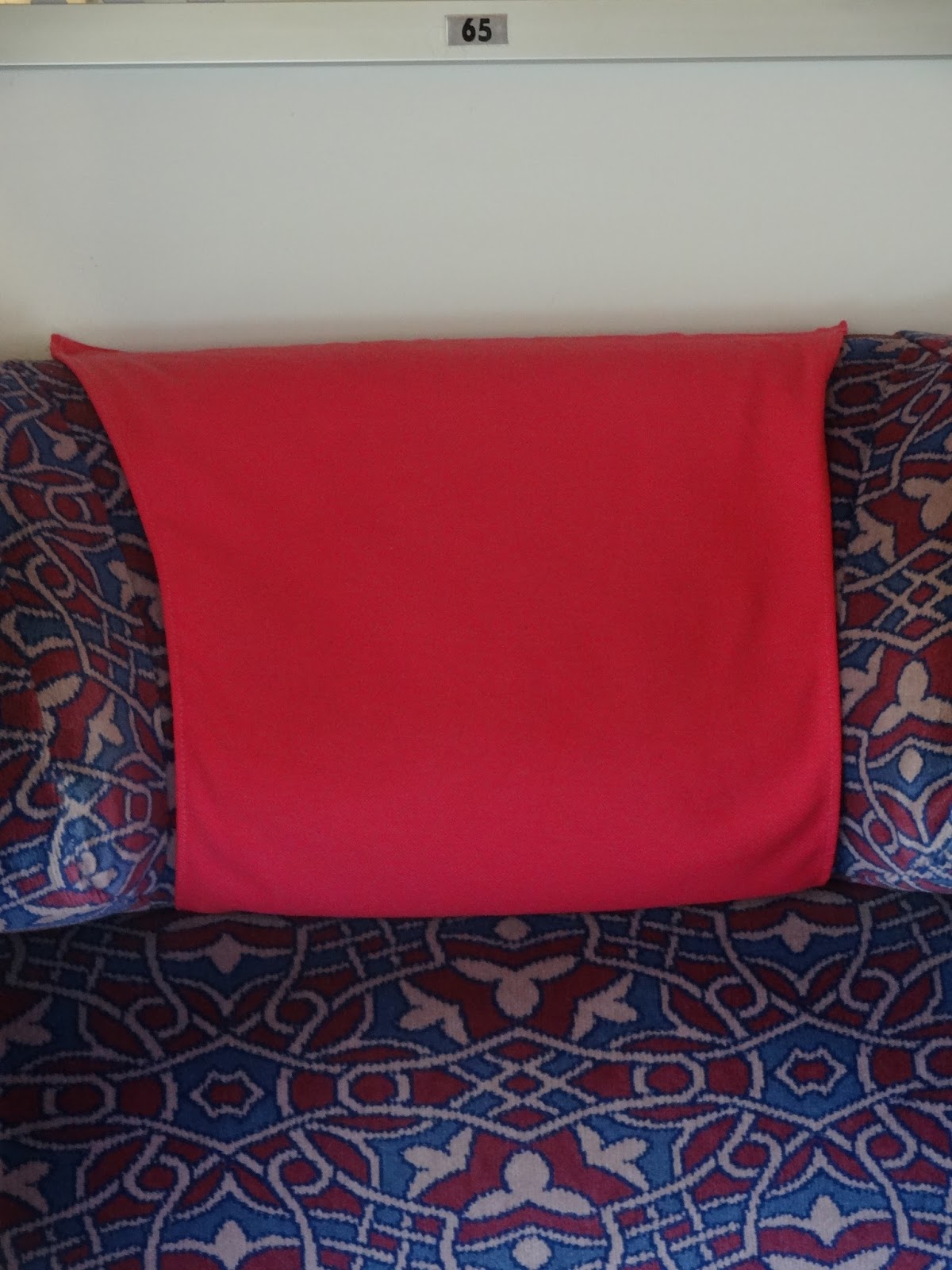 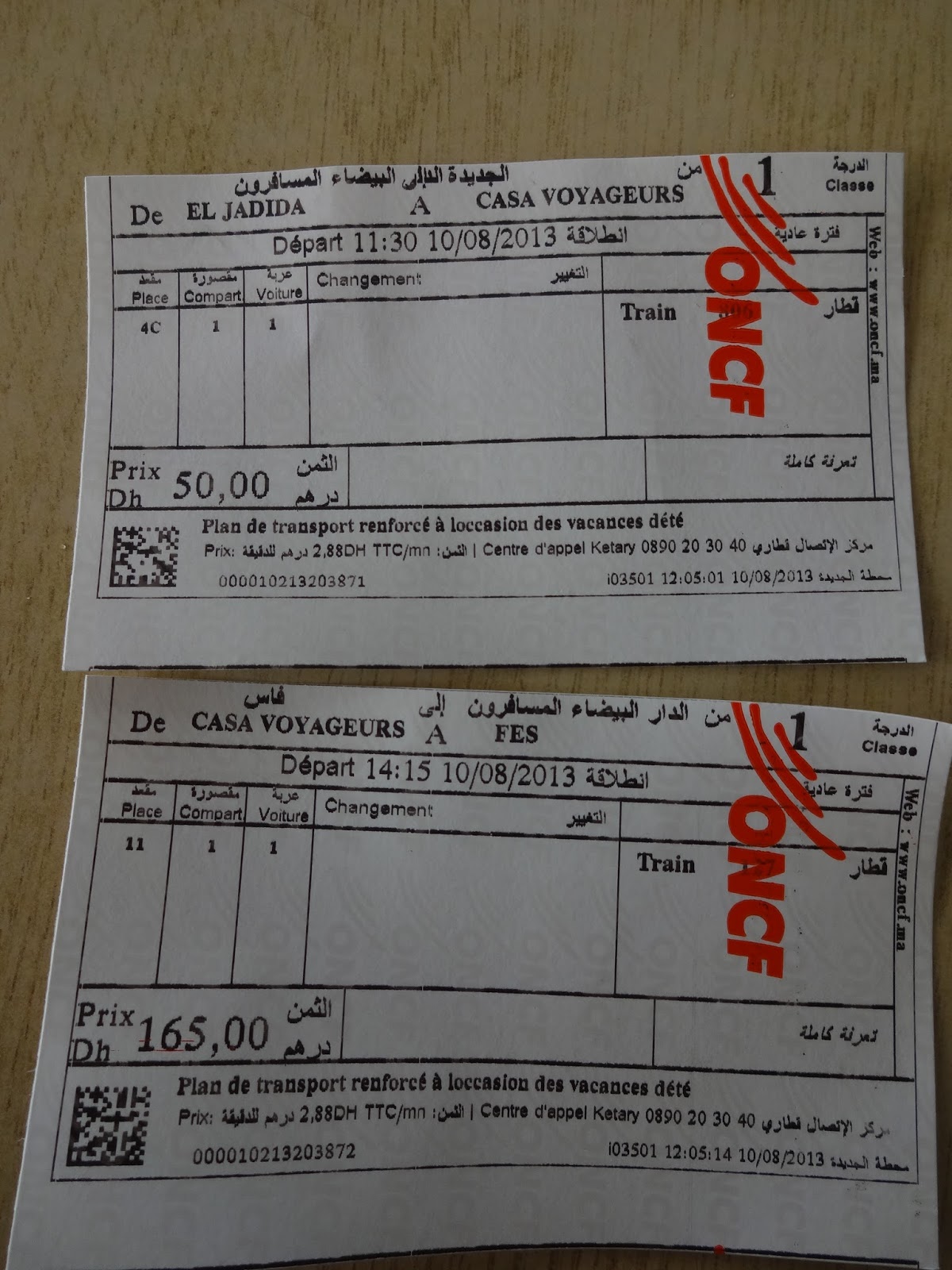 If you have a stop over/train-change, you will either get two separate tickets like this OR one ticket with the train-change station listed in the middle under 'Changement'.
Of course, the Departure and Arrival location is located on the top of the ticket along with the time and date.  If you get a single ticket with a train-change, it may not list the Departure of the second train.
Ask people on the train when your stop is coming up or ask staff walking back and forth on the train to alert you to your stop over.  Ask people: 'Combien minute a ________?'(How many minutes to_______?).  Admittedly the signs at the stations are hard to see, so you have to watch closely when the train slows down to a train station.  They used a terrible choice of colours for the sign. It's so hard to see the orange print on the grey. Gosh!! 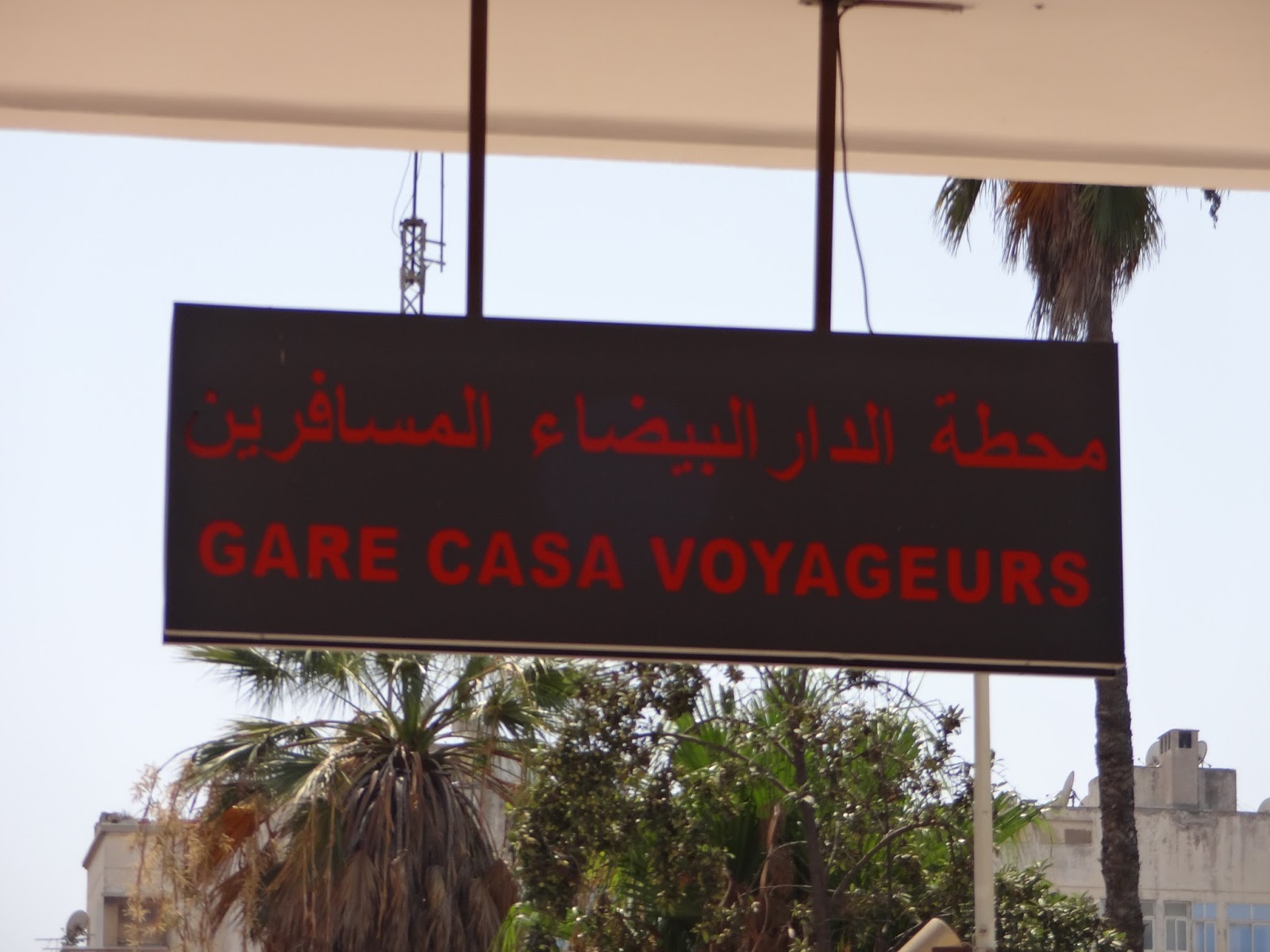 Have you ever used a subway? Sometimes the train switch is as easy as that.  All you have to do is get off one train, and figure out where your platform is for the next train and walk underground and over to the next platform.  There's always staff hanging around who can assist you.  Just show them your ticket, and they'll tell you the platform number.  There will be clear signs directing you to that platform.  At that platform there will be signs that list the Destination, Departure Time and Train Number.
﻿ 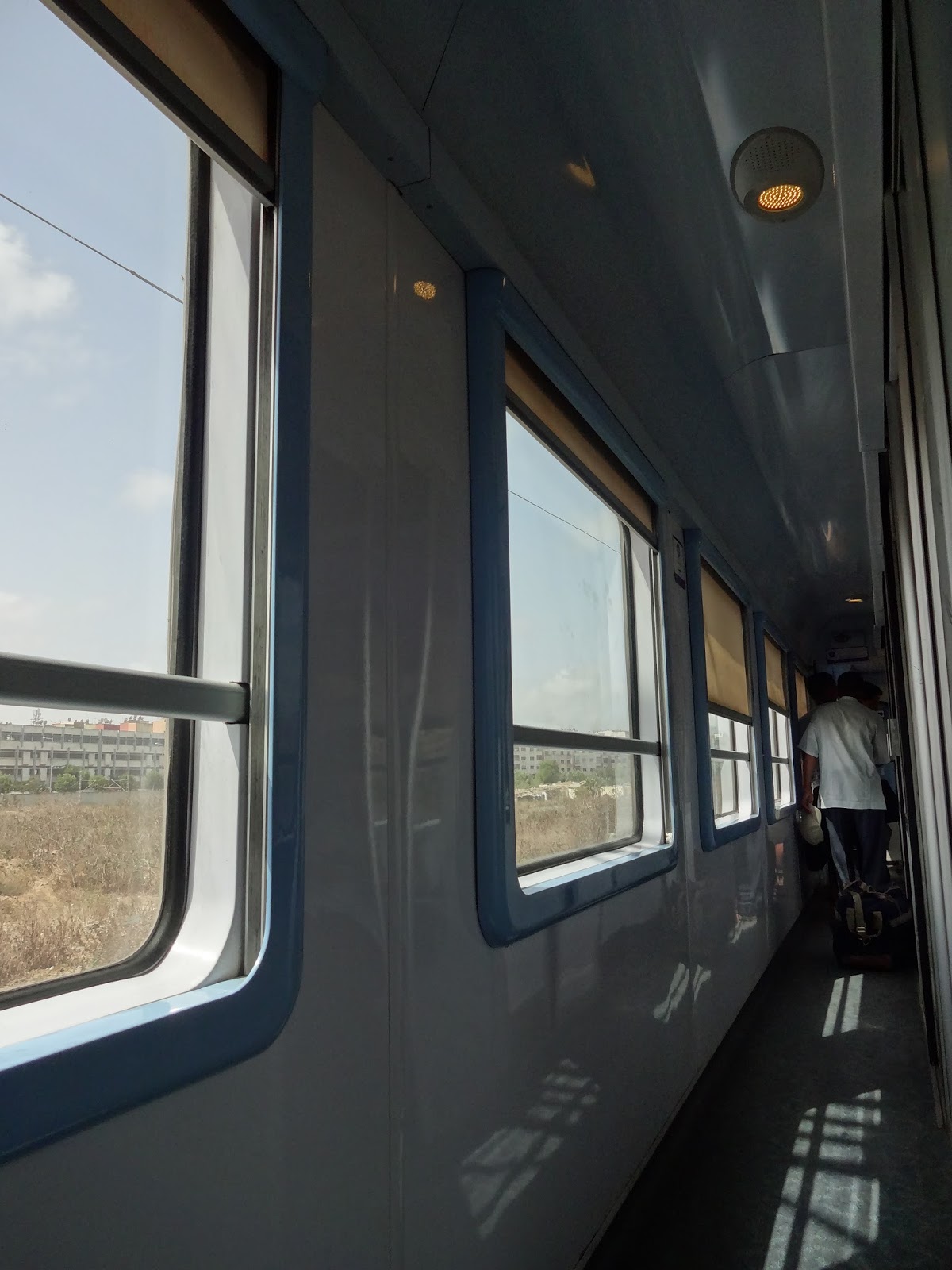 The tight alley way.  It is narrower than it looks. 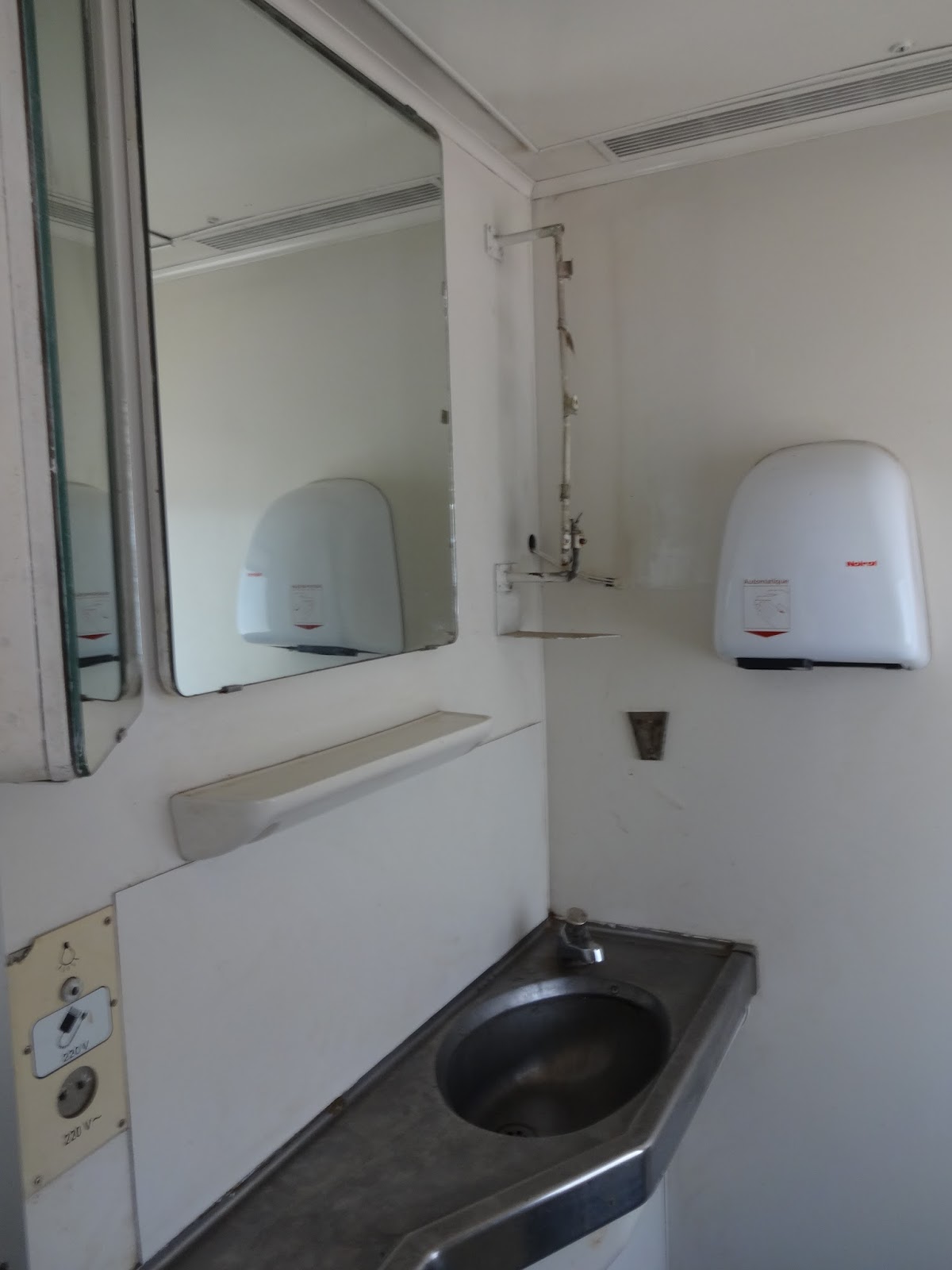 First class washroom.  Just cleaned. I could smell the Pine Sol (or whatever the Moroccan version is) 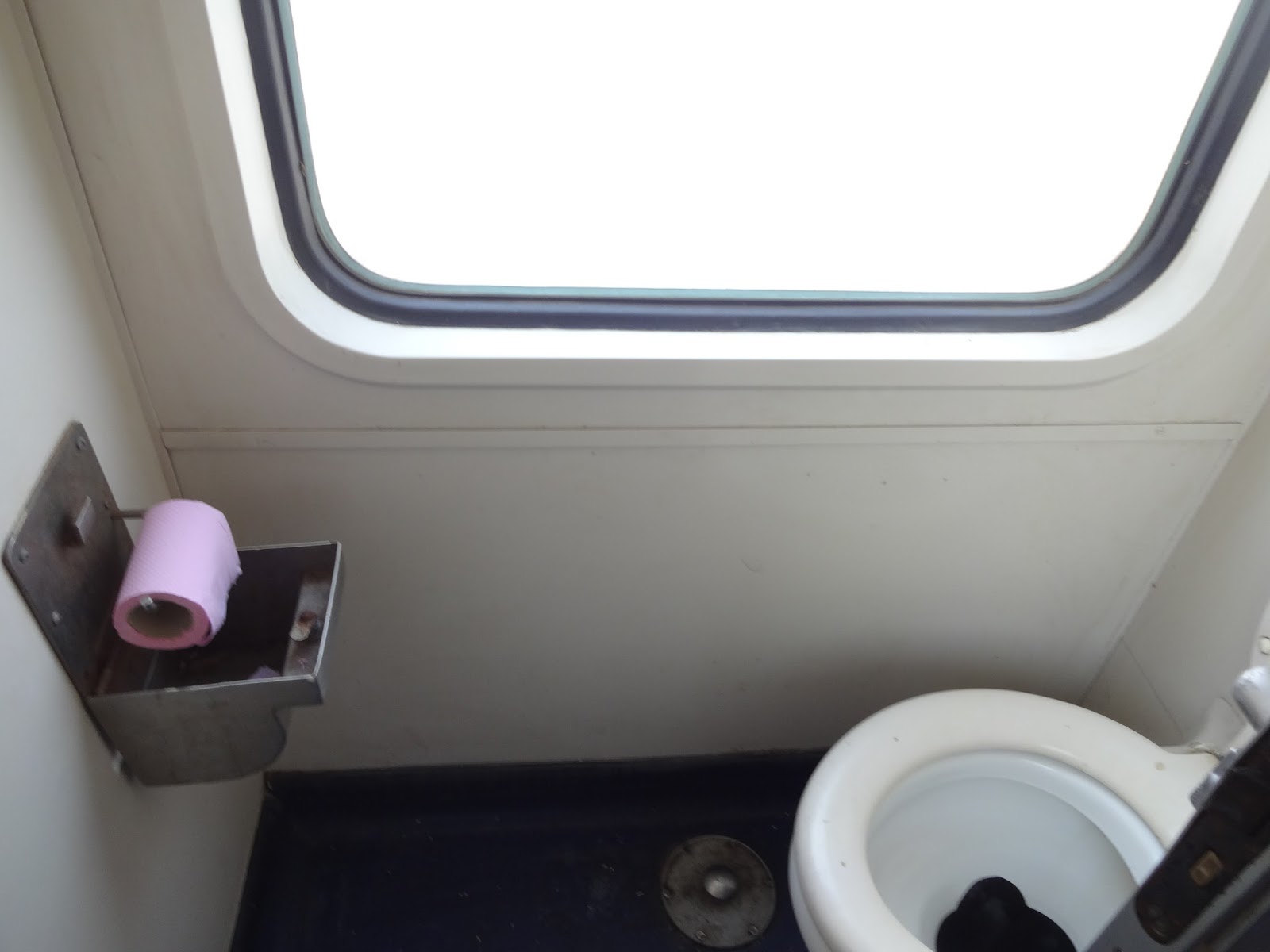 Beware
People working for tour guides and companies will come on the train acting as your average traveler.  They actually spend their days on the train going back and forth trying to promote tours.  Tourism police try to stop them from riding the train and suckering tourists into taking up their friend's services.

Basically they walk throughout the train sizing the carts up for tourists.  When they see someone, they randomly come and sit down and strike up a conversation, asking you where you're from, how you're enjoying Morocco, where you've travelled so far, what you do back home etc.  They establish a natural flow to the conversation.

They also suggest tourist locations you can visit and offer to connect you with a tour guide who will personalize your trip and not just take you to the regular tourist traps where guides will get commission.  They'll try and put down other tour guides and promote their own.

I was approached by two different men on a trip to Fes.  The first came in and sat down and started making conversation.  He seemed like a business professional as he had a leather bag and tablet (like an ipad).  When I told him I was in Canada, he told me that he studied there.  He showed me some tourist sites I can visit and then started to suggest tour guides.  I told him I had everything set up.  I had a suspicion that he was just a promoter, so I kept putting my earphones back on as I was already watching a movie on my laptop.  At one point he said he'd be back.  He left the cart, but left his bag behind.  Another time, at a stop, he said he saw his friend outside and would be back.  He took his bag with him, which I thought was strange.  He never returned.  I guess he figured he was getting no where with me.

Another younger man came in, which I thought was weird, because it wasn't at a stop.  It was randomly during the train ride.  He said he was an architect and restored UNESCO sites.  It seemed like a pretty lofty position for a man in his early 20's, but who am I to judge.  He also made conversation and did the same thing: providing riad suggestions and tour guide suggestions.

Do you feel better prepared after reading this blog?